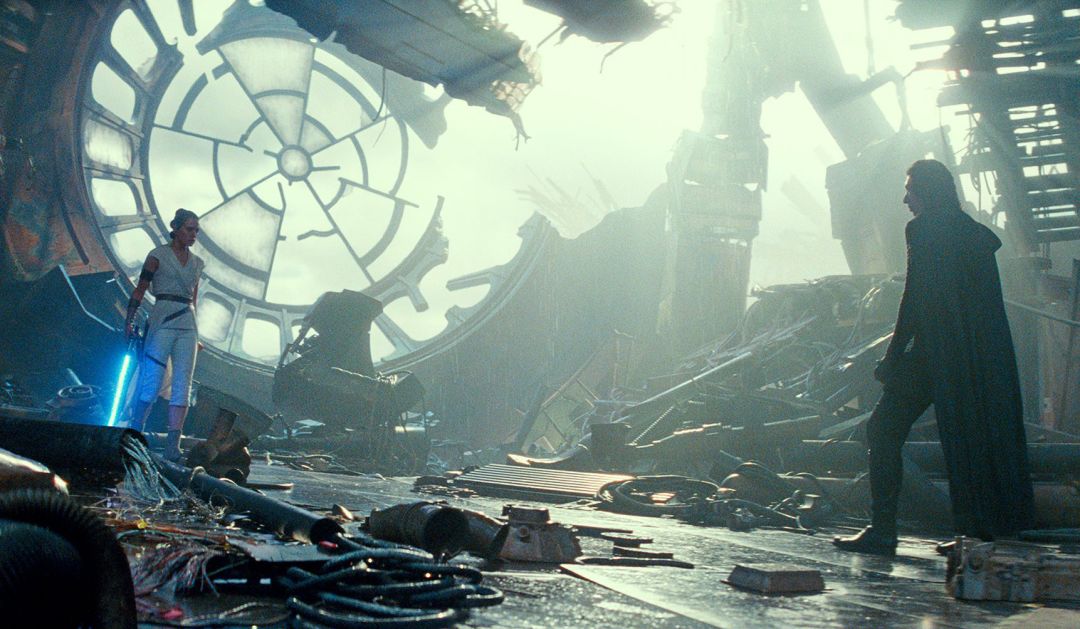 Review: ‘Star Wars: The Rise of Skywalker’ Goes For Fan Service Over Substance

To call the dialogue around Star Wars deafening would be an understatement. No franchise on Earth inspires as much frustration or anger at the drop of a hat. The audience for the sci-fi epic has seemingly been at odds with itself since Empire Strikes Back, but the ferocity at which we consume the content has never dwindled. The most recent trilogy has been no different, with loud and valid criticisms echoing throughout the series. Disney and LucasFilm seem ready to move on from the divisiveness, by ending the storied “Skywalker Saga” with Star Wars: The Rise of Skywalker. With J.J. Abrams back in the director’s chair, it quickly becomes apparent that your interpretation of the meaning of Star Wars colors your opinion of the finale.

Whether intentional or not, the rushed product shows on the screen, featuring heavy fan service over new storytelling. Depending on where you land as a consumer, you’ll find value or anger. In this critic’s opinion, we’ve reached a new low for the series, cementing a sad truth about the franchise. With The Rise of Skywalker, Abrams confirmed that originality in this franchise can only come outside of the Skywalker tales. The sprint to the finish leaves the audience with a movie that has more in common with Transformers than Return of the Jedi.

The Rise of Skywalker begins with our characters spread out throughout the galaxy. Kylo Ren (Adam Driver) hunts for the shadow of Emperor Palpatine (Ian McDiarmid). Rey (Daisy Ridley) continues her Jedi training under the tutelage of Leia (Carrie Fisher). Finn (John Boyega), Poe (Oscar Isaac) and Chewie (Joonas Suotamo) search for secret information from a Rebel Spy. With it clear that Palpatine has returned with an army unlike any other, the next generation begins a quest to stop Palpatine and the enormous power he wields.

The issues within the film begin almost immediately. After the opening crawl confirms that Palpatine has resurfaced, it enters into a non-stop montage of planet jumping. The breakneck pace provides some interesting moments but never lets us feel a sense of place. Within the first thirty minutes, we visit more than a half-dozen unique locations, but the film does not even bother to let you know the names of many of them. Abrams chooses to cram in an entire trilogies worth of story into a two and half hour film, burning through the plot without allowing us to feel anything. Even the announcement that the equivalent of Space Hitler has returned elicits nearly no reaction from the characters listening. Setting up the story in such a way removes any stakes of consequence. It’s clear that no real character development will occur, and this issue plagues the rest of the film.

Unfortunately, Rise of Skywalker features the worst script of the Disney films, making Solo look like Faulkner. The platitudes of “there are more of us then there are of them” and “don’t be afraid of who you are” come across as meaningless diatribes. What makes their recurrence so frustrating is that they are flat out not supported by the film in question. The “Final Order” (an extremely boring name that is the Star Wars equivalent of Unobtainium) literally has more ships with more firepower, and the question of identity drags the film down at every turn. Worst of all, we spend time on plot lines that could be condensed with another round of rewrites, making you question if there was a memo to make a release date rather than tell a powerful story.

Even worse, Abrams embarks on the journey without a thesis statement for why this story should exist at all. Much of The Rise of Skywalker feels like fan-fiction, promising the audience to “check out this cool thing I thought of” instead of imbuing the story with meaning. Whether or not you enjoyed The Last Jedi or The Force Awakens, each film challenges its audience. The Last Jedi asks the audience to imagine a world beyond the Skywalker saga, democratizing the story and the Force in a way that hasn’t been true since A New Hope. On the flip side, the Force Awakens wonders what success looks like when you’re standing in the shadows of giants. It questions how we make our own way, both to our benefit and detriment. Instead, The Rise of Skywalker is more focused on plodding along to hit plot checkpoints than give our characters the endings they deserved.

For all its faults, Ridley and Driver build on their excellent chemistry. Each of the actors has put so much heart into the roles that their relationship remains the lone bright spot of the film. Ridley does her best to make her character have internal moments, but the neverending string of MacGuffins leaves her with no time to reflect on her future. Driver gets more personal moments, but you can’t help but feel the loss of Fisher in his role. Perhaps the most baffling choice in the film occurs early on when Abrams resurrects the helmet. Beyond the obvious dig at Johnson’s choice to destroy it, Abrams puts one of the most emotional and expressive performers on the planet behind a mask again. Why he did this at all continues to baffle me.

Any character that received real development in The Last Jedi gets walked back. We have to watch Poe become a leader (again), Finn becomes a force-sensitive (I guess?), and Rose gets Jar Jar’d. Original cast members are tossed at the screen on infinite loop in order to placate fans who want to see the expanded adventures of Luke, Leia, Han and Lando. This takes the power out of this generation’s hands, leaving them to become side characters within the saga. Instead, the Palpatine reveals becomes a Blofeld level explainer, as he was the puppeteer pulling all the strings of all the characters for nine films. Rather than build upon the film that came before, Abrams does everything he can to ignore it, despite the fact that he was unwilling to commit to the franchise just five years ago.

For some fans, this will work. After all, what Star Wars means to you entirely depends on the viewer. However, as a piece of storytelling, this film is broken. It has bad dialogue, does not give its characters time to breathe in any real way, and focuses too much on fan service to tell its own tale. Everything in this movie has already come to pass in the Star Wars universe with better storytelling. If it cannot expand itself beyond those moments, its not a movie. Its a piece of fan fiction. I’ve always wanted this franchise to move beyond its original trilogy. With The Rise of Skywalker, it’s proven that the ghosts are too powerful from ever letting it do so.

What did you think of Star Wars: The Rise of Skywalker? Let us know in the comments below! Check out the other Star War rankings here!

Check out our other reviews from We Bought a Blog here! Check out AJ’s Letterboxd to keep up with what he’s watching!

3 thoughts on “Review: ‘Star Wars: The Rise of Skywalker’ Goes For Fan Service Over Substance”