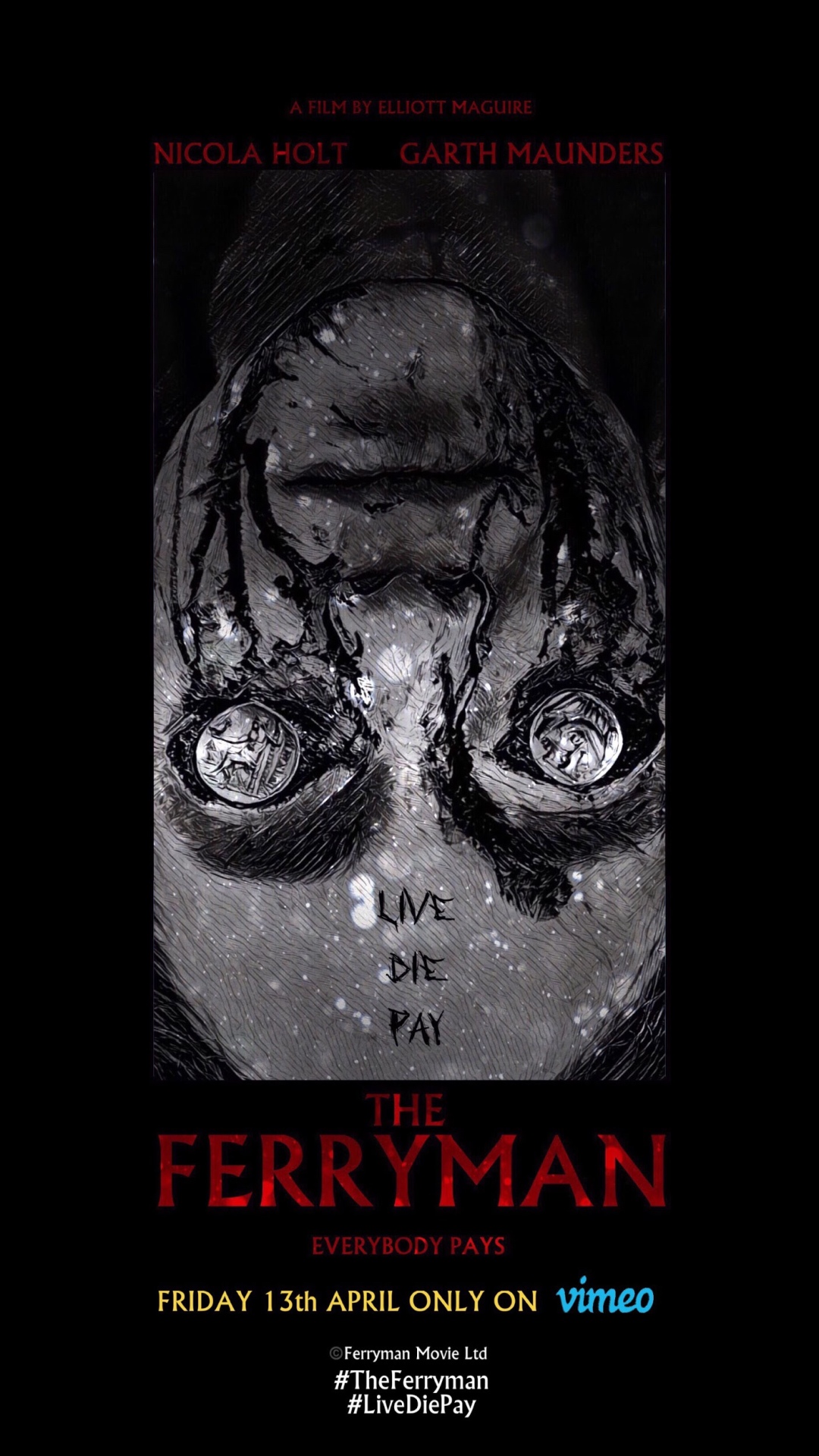 Film Review: The Ferryman: Art, Terror and Allegories…Horror at its Finest.

“The Ferryman” demonstrates that blockbuster horror movies are not a requirement for good horror films. Elliott Maguire a fledgling director, producer and writer of “The Ferryman” did a magnificent job recording, editing and producing this full-length film using only an iPhone 7 on a budget of £1500 (approx. $2123). A cinematic feat worthy of notoriety on its own, the film continues to create art through its beautifully shot cinematography, message and acting. In “The Ferryman” Maguire acknowledges that the camera can become much more than just a lens. It can become a storyteller. Maguire utilizing repetition, intimate close-ups of the beautifully designed lighting allows just enough visibility to see, but not enough to allow a sense of safety.

Niccola Holt and Garth Maunders do a fantastic job of making Maguire’s “The Ferryman” visceral. The bond between a daughter and her estranged father creates the attachment which allows room for emotional stakes to be built. This gives Mara’s fate importance and adds weight to the character’s decisions.

“The Ferryman” portrays Mara (Nicola Holt) as a grieving daughter stuck in a cyclical depression due to the loss of her mother. A slew of well-shot repetitive scenes beautifully depicts Mara’s deep feeling of hopelessness without any dialogue. This cinematic technique gives credence to these moments and permits us to walk with Mara as her life loops through the monotony of grief and despair.

Mara’s world takes a turn into the macabre after deciding to take her own life. Maguire’s David Lynch-ian shot of Mara slipping from this world into the next is artfully composed. It provides the visual cues, while leaving enough clues to know what Mara is doing. This also avoids the mistake of “13 Reasons Why” which created a triggering effect among those with suicidal ideation.

Mara wakes up in the hospital, saved from her suicide attempt. Her estranged father Roland, played by Garth Maunders, is waiting. We come to find that Roland had abandoned Mara and her mother after Mara’s birth. Now with no family to take her in, in a state of distress, Roland becomes her new caretaker throughout her recovery. Mara, now placed into the custody of a complete stranger claiming to be her father, has to find a reason to live. This turns out to be the least of her worries. The Ferryman is coming to collect his toll. He refuses to leave until Mara has paid with her life. That or the Ferryman will take everyone she ever cares about over the river of Stix. 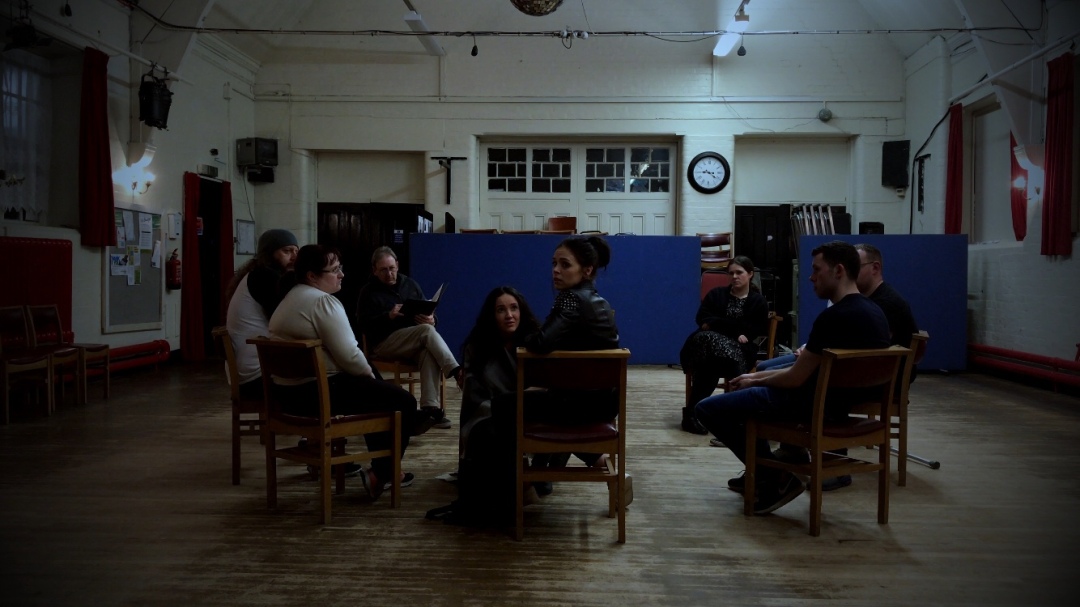 “The Ferryman” utilizes horror as a framework to shine a light on a mental health and suicide, an issue that society deems uncomfortable. When Mara attends a suicide prevention group therapy session she is faced with members of the group, one individual Julia (Shobi Rae Mclean) in particular, who claims that suicide is a selfish act. That people who commit suicide are not thinking about all the people that they are leaving behind. The therapist in this group session counters this idea by positing that it is selfish of the living to will people who find no joy in life to continue to live for other sake. That people who are suicidal are in such a deep state of despair that willing them to continue to live for YOUR sake is unfathomable. This ethos builds on the allegory of the Ferryman, a monstrous representation of depression and suicidal ideation. As long as Mara continues to live the Ferryman (her depression) will continue to make the people around her pay. In this film, people literally with their lives. The mantra the Ferryman communicates to Mara over the course of the movie “You live, they pay” is a common thread of people with mental illness. That their disposition creates a world where they are in pain and yet, through this pain, the people around them suffer.

“The Ferryman” is an amazing indie horror film that is a beautifully crafted allegory providing society with the point of view of the individual suffering from mental illness. The cinematography is artistically shot by Maguire proving a deep understanding of what each shot was meant to say to the viewer. The film and the cinematography creates an ambiance that is dark, spooky, yet beautiful. With that said, there are some flaws in certain scenes where the audio or lighting affects the scene. This may be affected by the low budget method of filming and not quite the film itself. There were also some questionable acting and writing coming from the detective character (Azz Mohammed) who questions Mara as the people around her continue to die. Mohammed’s acting at times seemed clunky and unconvincing. Unfortunately, this may be due to the need to tell, rather than show, the horrors happening to Mara over the course of the movie. Overall this role doesn’t play a pivotal part in the movie and the fact that Niccola and Garth are so convincing kept me yearning for more.

Overall, I enjoyed watching this film. I always enjoy supporting young up and coming directors/films. Especially when they are willing to use horror as a tool to generate conversation about topics we are scared to converse about. So, support the arts, support Indy films and watch “The Ferryman” it absolutely is worth the $1.29 rental fee. You can grab this movie at https://vimeo.com/ondemand/theferryman out tomorrow Friday the 13th! Keep it spooky!