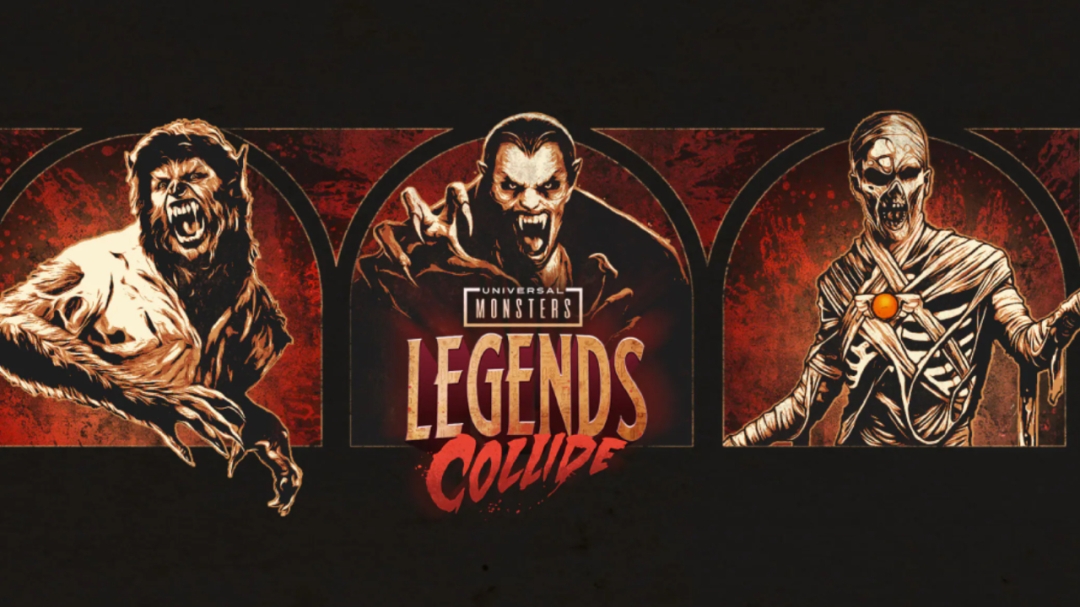 Halloween Horror Nights 31 Preview: We Did the Monster Mash

Easily becoming one of the most exciting remix houses in recent years, the Universal Monsters have proved themselves more than capable of holding their own. Not only do they continue to rise in popularity, but they serve up genuinely great scares. While one might assume the “classic” status would chill them out, the creative team continues to push the boundaries on the characters through terrific re-designs and scarier versions of the creatures. Without a doubt, Universal Monsters: Legends Collide earns its high ranking on our hype meter.

What we know so far is that the house will focus on a fight for an amulet. For the Wolf Man, it likely offers some cure. For the Mummy and Dracula, we’re guessing it will bring more power. It would be surprising if the house does not have a similar system to last year’s Icon house, with potentially different endings depending on what time of the night you complete the maze. Finally, we know the story will continue on each coast. That is intriguing but obviously not something feasible for many of us. We have some more notes, but we’re going to leave that to the Spoiler section at the bottom of the article.

CHARACTERS/EFFECTS WE HOPE TO SEE

Mummy, Wolf Man, Dracula – The trio will obviously be leading the house. The questions now revolve in how much time we spend with each of them. Fingers crossed we get the most from The Wolf Man, who often gets the short shrift when it comes to the parks. While we get a werewolf in Horror Makeup, Drac owns pop culture (even our Podcast’s name), and Mummy’s got his own ride.

Mummy Minions – One of the coolest things about Mummy has always been the integration of Egyptian theology into the story. While scarab beetles became a breakout creature in the films, there are plenty of other monsters that can find their way into this story. With an Egyptian

Egyptian Priests – It would be surprising if Universal creative ignored a chance to punish overly devout individuals to any greater powers. An Egyptian priest definitely seems like they’re on the chopping block.

Hunters – If we do get a sequence back in England, we need to see Wolf Man on the hunt. Hunters being hunted sounds like fun to me.

Gill-Man – He cameoed in the Bride house last year. Fingers crossed, he’s back again this year (maybe even Mummy-Gill-Man?)

The Invisible Man – You can’t prove to me that he’s not there.

The Talbot Estate – While it seems likely that the entire house occurs in Egypt, it would be very cool to start the house on the Talbot Estate. Let us walk in the woods where Talbot kills his first victims and fights against his own family. It would be a great way for us to learn the personal stakes Talbot faces.

A Dig Site – Based on the mere fact that the Wolf Man and Dracula are involved, it is unlikely we are in ancient Egypt. That means a modern spin on the story, and with modernity comes archeologists. Let’s visit a dig site or a camp before we descend into a pyramid.

The Interior of the Pyramid – Once we get to Egypt, I want to go deep into the tomb itself. At HHN 26, we were lucky enough to see how this would manifest itself with a blank slate. The Tomb of the Ancients was an undeniable Top 3 house of the year. It was a chilling house because of the number of scaractors and hidden locations they could build into the house. However, that was Sprung Tent, non-IP house. Delivering a story-driven, Parade Warehouse house usually means more story, less scary. Fingers crossed, they can navigate that tightrope.

Ritual Sacrifice Room – What’s a good mummy house without a sacrificial chamber? Let’s get gross (hopefully, a spine rip is on the table).

Sarcophagus Scare – Having Scaractors emerge from coffins and sarcophagi is not a new idea. Hopefully, we get at least one of these in the house, if not a much larger setpiece featuring a hallway full of Sarcophagi.

“Spanish” Dracula (1931) – Directed by George Melford– The iconic film that kicked it all off is a must-watch. After all, Bela Lugosi. However, we’re recommending the lesser-seen Spanish Dracula. Back in the 1930s, films were often filmed in a second language with a new cast, instead of using dubs. Melford decided he wanted to do a bit more with his version of Dracula than Tod Browning did with his. Featuring Carlos Villarias as the titular vampire, Melford’s version is sexier, more melodramatic, and runs about 15 minutes longer than the original. Several of the performances are legitimately better than the ones we all know.

The Mummy (1932) – Directed by Karl Freund – Boris Karloff was already a star when The Mummy released, but his performance as Imhotep changed the trajectory of his career. He was not limited to the monster roles that would consume Lugosi or

The Wolf Man (1941) – Directed by George Waggner – Something about Lon Cheney Jr. as Laurence Talbot never gets old. While his father was already a famed creature performer, Cheney delivers a performance on par with his father’s Hunchback in the original The Wolf Man film. His honesty and vulnerability in the role make the performance timeless. He feels like a modern performer in ways that surprise. He especially pops when he’s asked to hit the emotional beats of the film. Lugosi appears in a small role as well.

Abbot and Costello Meet Frankenstein (1948) – Directed by Charles Barton – Widely regarded as one of the early funny horror films, the comedic duo stumbling into a monster movie was quite the hit in the 1940s. While the humor may not hold up as it once did, it’s worth noting the reigning performers for several popular monsters. Chaney Jr., Lugosi, and Glenn Strange (who played the Monster throughout the 1940s) all appear. Even Vincent Price makes a cameo.

What do you expect out of The Horrors of Blumhouse: Freaky & Black Phone at HHN 31? Let us hear your thoughts in the comments below!

Check out our Halloween Horror Nights 31 series here! Not just written articles, but a podcast too!

SPOILERS !!! DO NOT READ IF YOU WANT TO BE SURPRISED BY THE HOUSE

At the 2022 “Summer” Spooky Empire convention, a team from Universal Orlando surprised the convention with a deep discussion of the plot of the house. Below we’re revealing some of those tidbits. Again, SPOILERS AHEAD.

The house will revolve around Laurence Talbot AKA The Wolf Man. He receives knowledge of an amulet that can potentially help him lift his curse has recently been unearthed on a dig site. The Amulet of Ra possesses the Power of the Sun, which may allow him to fight back against the power of a full moon. As the Wolf Man descends into a pyramid, the Mummy is awakened, and the two do battle. While this occurs, Dracula hopes to retrieve the Amulet for himself.