Few movie stars have attained relevance in four consecutive decades. The list becomes even smaller when you look to people of color. Denzel Washington’s five-decade run has been peerless in terms of critical reception and awards recognition. Yet Will Smith‘s career, spanning music, television, and Hollywood blockbusters, is just as unlikely. While Smith seemingly coasted on his celebrity in the past decade, there were signs that he was ready for a big comeback. One of entertainment’s most prominent stars returns to hold court with his performance in King Richard, a film about Venus and Serena Williams‘ life as phenoms. While King Richard makes some missteps on the way, Smith and his co-stars will win over audiences with emotional and heartfelt performances.

Before the Rodney King riots would rock Los Angeles, Richard Williams (Smith) desperately pitches tennis coaches to take his daughters as their next proteges. Thanks to his meticulous planning and buy-in from his wife Brandy (Aunjanue Ellis), his daughters Venus (Saniyya Sidney) and Serena (Demi Singleton) have become phenoms. Unfortunately, no coach will take on two prospects from Compton. This changes after Richard forces coach Paul Cohen (Tony Goodwyn) to watch his girls. Soon, the suitors come calling from across the country, including superstar coach Rick Macci (Jon Bernthal). Along the way, Richard makes unconventional and unrealistic demands on those around him as he sticks to his vision of his daughters’ careers. 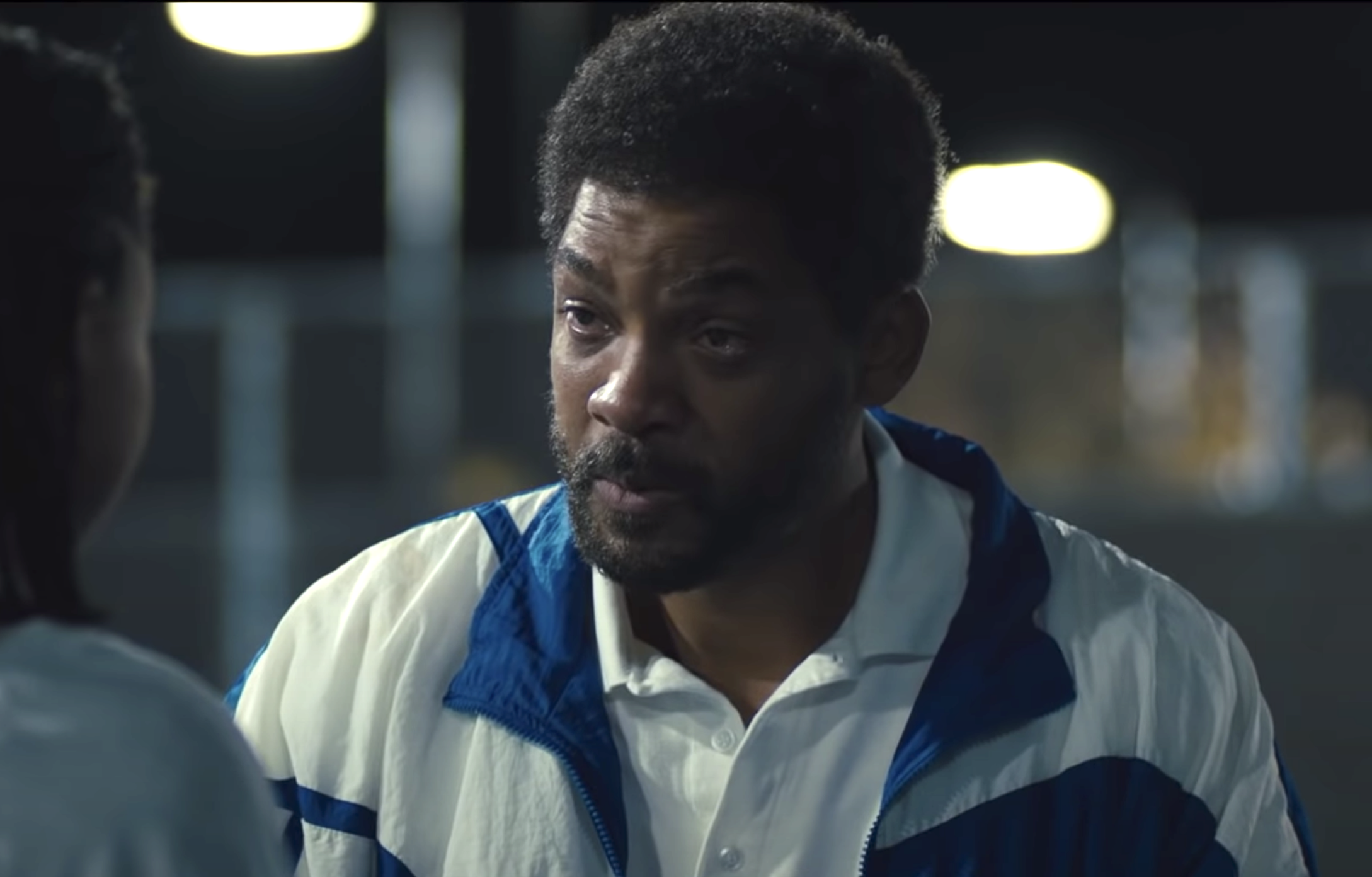 Director Reinaldo Marcus Green expertly navigates the balancing act of creating an exciting sports film and allowing his actors to develop the interiority of their characters. The screenplay from Zach Baylin provides all the setup and context for the tennis laymen, assuming you’ve never heard of Venus or Serena. Yet Green’s direction finds tension and genuine heartbreak in a story that transcends the sport. We know that the Williams sisters will become global icons, yet Green keeps us locked in the stakes of the moment. Every slight, every act of racism, and every stumble feels world-ending. Green’s ability to create this tension with an audience that is here to see the story of Venus and Serena is a masterful feat.

The Williams sisters serve as producers on King Richard, signing off on every depiction and story element touched on throughout the film. It is a testament to their confidence and belief in their father that they would let Green dive into their childhood. The stories depicted do not paint Richard Williams as a generous or unselfish man. Instead, Smith brings out prideful ignorance and anger at the world for how Richard’s life journey. Given their success, the Williams sisters could have painted Richard as a man of conviction and heroism. Instead, he’s shown to be an imperfect vessel that exposes his family to strife and criticism. The film does little to canonize its famed protagonist. Simultaneously, it explores how their father’s guidance laid the path for superstardom. 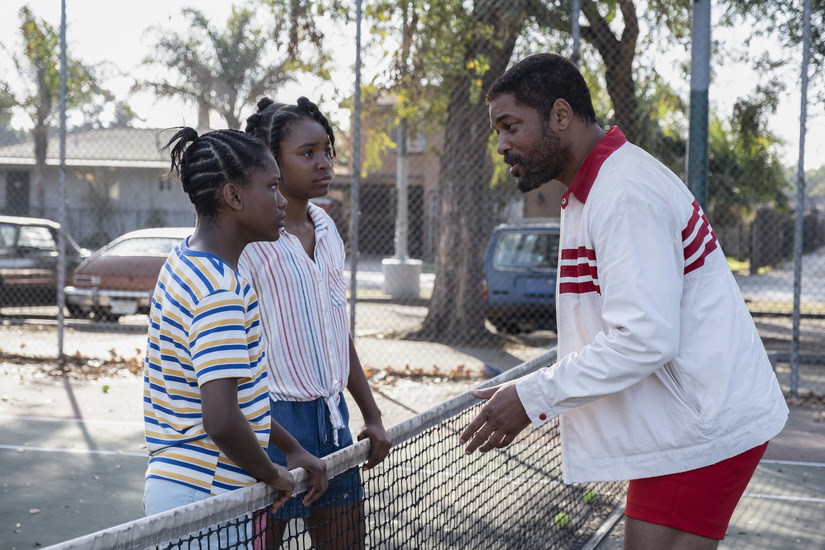 The depictions of Richard Williams as the “crazy sports Dad” were ever-present in the 1990s. For years, his actions shaped the discourse around sports and parenthood, even as recently as the “Teddy Perkins” episode of Atlanta in 2018. Despite the often negative associations many have with Richard, Smith fills the man with love and compassion. Smith captures the voice and mannerisms with ease, entirely disappearing into the character for most of the film.

Yet, his highly emotional performance goes beyond sheer mimicry. Smith channels the frustrations and anger of raising two superstars in his performance. He has been the father to two phenoms that the world has intently watched since infancy. The love he shows goes beyond mere acting and taps into the heartbreaking reality of becoming a superstar. Despite all the fame and power, he watched his children grow up in the public eye. There were missteps and triumphs, but the criticism of young children can be too much for anyone to bear. For Smith, his lived experience allows him to unlock something genuinely unique about the film.

While Smith draws much of the film’s focus, it is impossible to ignore the rest of its brilliant cast. Ellis emerges with another revelatory performance, coming on the heels of her Emmy-nominated work in When They See Us in 2019 and Lovecraft Country in 2020. She stands toe-to-toe against Smith’s instantly iconic performance and steals scene after scene anyway. To do this, Ellis reaches into her own emotionally charged performance. Few could withstand the withering glares she delivers at times. During a verbal row in a kitchen, Ellis delivers more knockout blows than Smith received in Ali, a clip that will surely be her Oscar reel should the Academy nominate her. Even with Smith firing on all cylinders, Ellis becomes a force unto herself.

Bernthal makes waves with his turn as a funny but often frustrated tennis guru. Bernthal channels Macci’s eccentric personality to comedic effect and becomes an audience surrogate in the film’s back half. He knows the greatness that awaits the girls, and he wants them to enjoy that greatness now as soon as possible. Bernthal comes off as ambitious and caring, a rare combination that would feel tonally frustrating in lesser films. Bernthal continually makes choices that jump off the screen, and his energy rejuvenates the audience just as the film begins to drag. 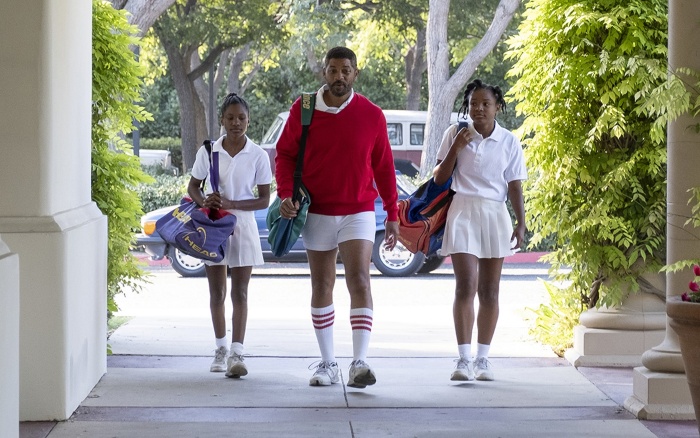 It would be a crime to ignore the performances from Sidney and Singleton, the two young actresses portraying the Williams sisters. Not only do characters marvel at the discovery of the Williams girls, but audiences should cheer on the discovery of these talents. Each of the girls finds room on the margins to carve out little moments. Sidney highlights the fact that Venus was only 14 when she turned pro. Singleton captures the drive and determination of Serena with perfection. They are both excellent but remind us why the movie about their rise focuses on their father, not the children. When given the opportunity, the children assert their agency and do it to emotionally fulfilling ends. Yet, it is their parent’s guidance that keeps them on the path towards superstardom. One can only hope that King Richard marks the beginning of a Linklater-style franchise, with Sidney and Singleton continuing to play the sisters over the next few decades.

For all the positives that one feels watching a film like King Richard, there are plenty of missteps throughout the film. Perhaps the most frustrating aspect of the film comes from its uninspired depiction of Compton gang violence. Thirty years ago, Boyz-n-the-Hood depicted the neighborhood as a dangerous and poor neighborhood. Yet it was also a vibrant world, one that felt lived-in and honest.

The version of Compton in King Richard traffics in some of the laziest depictions of the neighborhood. The worst offenses focus on the unruly gangs that roam the streets and tennis courts where the girls play. This creates an inherent issue between someone like Richard Williams, and the anonymous gang members on screen. For Williams, he becomes reduced to the “right kind” of black man, even as he displays bawdy contempt for the white men who run tennis. The film does not need to traffic in stereotypes of street violence to sell us on the struggle the Williams sisters faced. Yet, its inclusion will undoubtedly sell the danger to less informed audiences.

King Richard delivers on its feel-good premise and overcomes many of the issues facing typical sports films. Smith delivers career-best work and could very well find himself sweeping the awards season this year. Likewise, Ellis could find herself on a similar trajectory if audiences appreciate her outstanding work. Few films will please more than King Richard, and for many, it will be their favorite film of the year.

What do you think of King Richard? Let us know in the comments below!