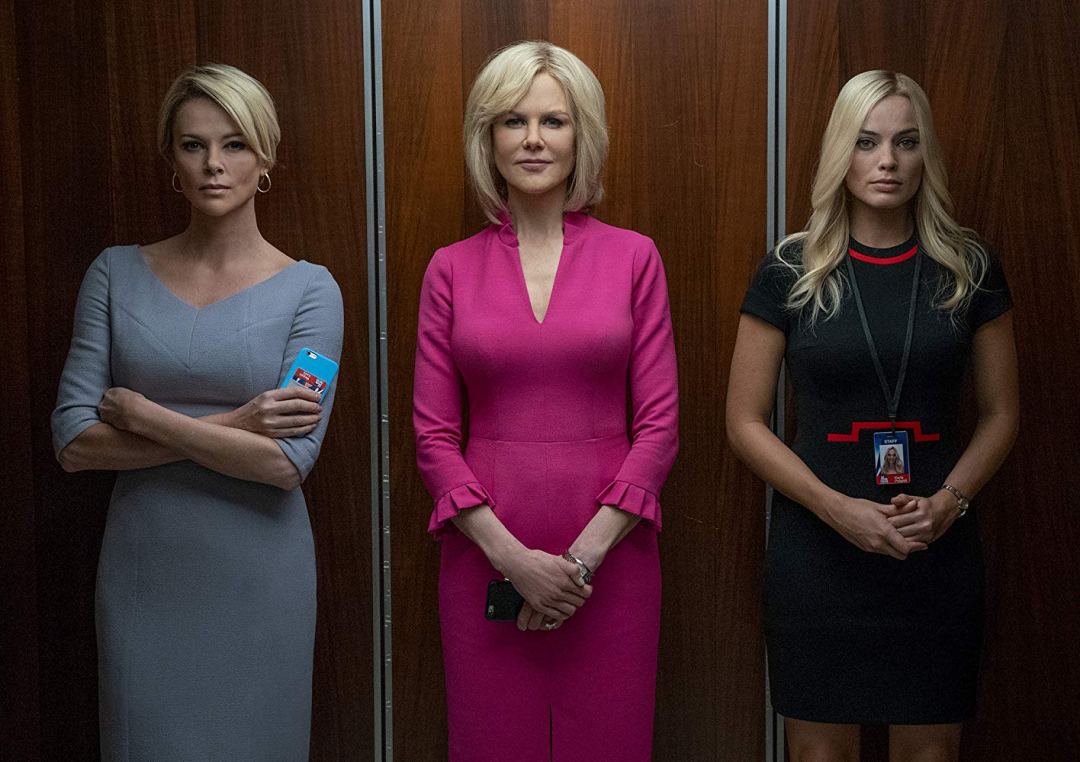 Review: ‘Bombshell’ Opts For Gimmicks Rather Than Substance

The Me Too movement shook up the entertainment landscape in ways we never thought we’d see. Many actors and executives responsible for horrific actions were brought down in the process. The movement extended beyond the world of film, even making its way into the political arena. The stories about Roger Ailes, the man responsible for the growth of Fox News, were always in the air. Yet it was not until July of 2016 when allegations were made public. Bombshell covers the stories of Gretchen Carlson (Nicole Kidman) and Megyn Kelly (Charlize Theron) as it examines the toxic environment at Fox News. However, the film’s flashy facade undercuts the story in question, creating tones seemingly at war with each other.

The four key characters of Bombshell provide extremely different roles. Kelly (Theron) functions as a pseudo-lead for the film, often stepping in to provide narration. She gives us a tour of Fox News, keys us into the political workings within the company, and highlights her team as integral players. Carlson (Kidman) is the whistleblower and the first to come out against Ailes. She’s inherently the least divisive of the characters, in part because she actively goes against the Fox News brand from the moment we see her on-screen. Kayla Pospisil (Margot Robbie) adds a different dynamic to the story. As a composite character, she blends attributes of many of Ailes’ victims into a single narrative, giving her many of the showier and more dramatic beats. Finally, Ailes (John Lithgow) looms large over the film as a paranoid, power-hungry monster. 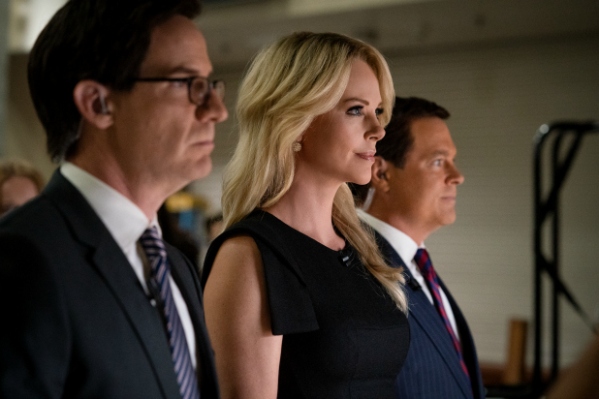 The three women who lead the charge each deliver excellent performances. Theron draws the most obvious praise, completely disappearing into the role of Kelly. She looks the part thanks to outstanding makeup. However, the real surprise comes in how she captures her voice and mannerisms to perfection. Theron strips down the news anchor to reveal the true ambition and charisma that has made Kelly reviled in some circles while a hero in others. In the sweet, intimate moments with her family, you can see Theron let the guard down. It’s a powerhouse performance, and owns the screen whenever she enters the frame.

Kidman gets substantially less material, in part because the real-life Carlson was sidelined during the internal investigations at Fox. Despite this, Kidman utilizes her time expertly. She brings enough charm where you understand the draw, but also keeps it clear she knows how to manipulate the situation to her benefit. Kidman has certainly been better, but for a quiet and internal role, she brings her A-game all the same. In the hands of a lesser actress, Carlson would frankly feel like an afterthought.

Robbie gets strong marks again, brandishing an accent and letting herself become vulnerable at a moment’s notice. She gets the biggest emotional swings of the film, standing in for every woman ever victimized in the workplace. She bears the brunt of the attacks, both the microaggressions and full-fledged sexual assault. Robbie turns in an extremely human performance, channeling the zealot beliefs of someone who grew up within a political ideology to perfection. The issues with Robbie’s character extend to the screenplay, but Robbie plays the character with such specificity, you’d believe this was a real person.

While the three ladies are each on point, the direction from Jay Roach and screenplay from Charles Randolph miss the mark. The quick-witted dialogue blends Sorkin and McKay for mostly unappealing results. While the story certainly merits attention, the fact is we’re less than four years from the downfall of Ailes. At the moment, there may not be enough context to understand the results of Carlson and Kelly’s accusation. Part of what made The People vs. O.J. Simpson or Vice appealing was the method in which the filmmakers put these moments into context with America at the time.

Bombshell never does this, and it never reaches a deeper level than “sexual harassment is bad,” a takeaway that feels obvious and unearned. Yes, there are some who do not understand how these events even occur in the workplace but are those people even going to watch this movie? In fact, the film suffers from not having a clear audience to deliver its story. Fox News remains a behemoth after the fallout, with many of the key defenders of Ailes taking larger roles in the public consciousness since the events in question. Liberal audiences keyed into these stories cannot shake the Fox News of it all. Even as characters lament their careers at the company, few actively stand up to take action. This dichotomy creates the impression that Bombshell wants you to like the film, but it can never fully grapple with the problematic issues at its core. 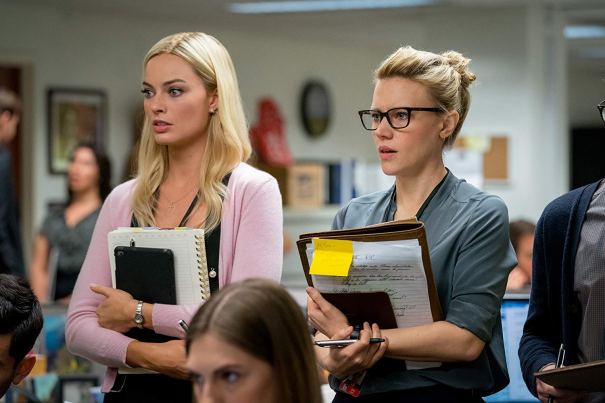 The Robbie character, while well-performed, presents its own problem. She’s one of two characters to actively step out of the Fox News bubble, but using a composite lessens that impact. Carlson should be the star of the story, but she’s wrapped up in NDAs to really contribute (a point the film actively makes). This forces an extra burden onto Robbie because, for whatever reason, Bombshell never addresses that Kelly walks to NBC in 2017. Instead, Robbie’s character becomes a stand-in for what the audience wants to see from the characters, but because of the real-world complexities, likely never happened. Playing the truth, that many people did not leave Fox as a result of the Ailes firing, and that many more were complicit in the harassment, does not play to the feel-good ending that Bombshell craves.

John Lithgow channels a far less compelling version of himself, buried under tons of makeup. Other than a physical resemblance to Ailes, there’s little we haven’t seen Lithgow do before. For the most part, his Ailes gets to be big, loud, and angry but does little else. The one-note performance misses the mark. Kate McKinnon gets her best movie role to date, playing a liberal LGBT woman working within the confines of Fox. However, her role does not get enough attention to result in any substantial takeaway. With dozens of other characters in the film, she eventually gets pushed into the background. Malcolm McDowell comes in for two scenes, actively playing to the back rows of the theater with a boisterous and silly turn as Rupert Murdock. Like Lithgow, his turn feels like a lesser version of better characters he’s played in the past.

To make matters worse, the film strews in dozens of cameos to bring other characters into the fold. The best of these cameos undeniably belongs to Richard Kind as Rudy Giuliani, but the character serves literally no purpose in the film. One or two off scenes for Jennifer Morrison, D’Arcy Carden, Ashley Greene, and Alice Eve come across as unimportant, especially because most are on-screen to be harassed and then never revisited. Meanwhile, the film makes sure that you know every major Fox News figure from the last two decades appears, including cameos for actors playing Bill O’Reilly, Neil Cavuto, and Sean Hannity. It sidelines more interesting development for the women of Fox News, in favor of the cinematic equivalent of finding Where’s Waldo’s cousins.

The uneven Bombshell suffers from a litany of problems. Yet the core three performances are each so compelling, you’ll be sucked into the story. For a film that covers supremely dark subject matter, Bombshell carries a considerable amount of energy from start to finish. Whether that’s good or bad will vary on the viewer. The Vice litmus test feels applicable, and if you liked McKay’s film last year, you’ll likely be down for this one. If not, you may find the Bombshell viewing experience unpleasant.

What did you think of Bombshell? Let us know in the comments below!

Check out our other reviews from We Bought a Blog here! Check out AJ’s Letterboxd to keep up with what he’s watching!

Loves movies, TV, and other Pop Culture happenings. Got his BA from Florida State University in English Literature and Sport Management. Got his MA from UCF in Mass Communication. View all posts by Alan French

2 thoughts on “Review: ‘Bombshell’ Opts For Gimmicks Rather Than Substance”