TV Review: ‘What We Do in the Shadows’ Surpasses the Original Film in Comedy and Creativity

Back in 2014, a small little indie film shook up horror fanbases. However, rather than being known as a terrifying new prodigy that we all had to check out, it was funny. Like really funny. We Do in the Shadows brought the mockumentary style of satire into the horror genre with unexpected results. Taika Waititi and Jermaine Clement had found success in America with the Flight of the Conchords HBO series. Applying their downright silly humor to the world of Vampires put a spotlight on each of them for the first time in years. The surprise hit instantly had fans clamoring for a sequel, and now, they’re giving us more of the vampire comedy. However, few would have guessed that it would be finding its way to the FX Network.

The new What We Do in the Shadows (TV Series) takes up with a new cast of characters and moves the story to America. Three vampires lead the way, including Nandor (Kayvan Novak), Nadja (Natasia Demetriou) and her lover Laszlo (Matt Berry). Colin Robinson (Mark Proksch) expands vampire lore as an “energy vampire” that can travel during the day and sucks his energy by boring people to death (including other vampires). The vampires are also serviced by Nandor’s familiar Guillermo (Harvey Guillen). 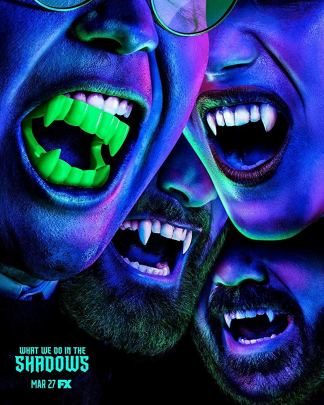 The series picks up the same tone and humor of the film and runs it to amazing extremes. Waititi and Clement helm the adaptation, returning as directors, producers, and showrunners. They use their power to push the boundaries of decency in ways the film never did. While the first episode begins tame, we are soon treated to hats made from witches, genitalia-shaped hedges (and not the genitalia you think), and what can only be described as a mountain of dead raccoons.

At the center of the series is a masterfully ridiculous performance from Berry. Fans of The IT Crowd will recognize the Brit from the start. Yet the ways in which he leans into the absurdities of his character only make him funnier. The commitment from Berry, especially in some of his line readings, makes everything click into place. If there was a cursing wing for in the TV Hall of Fame, Berry might be a first-ballot entry.

Not far behind is the Proksch, who absolutely slays as Colin Robinson. Another actor who leans into the ridiculous concepts of his character, Proksch creates laugh after laugh. Waititi and Clement know how to use him expertly, and he’s quite marvelous. The fact that Proksch got upgraded to series regular while the show was in production might have been the wisest move possible.

However, Berry also works due to the diversity of the other characters on screen. While he swings for the fences, Guillen will appeal to audiences as the loveable, if not abused by his masters, servant of the group. Novak fills in as a fun alternative to Waititi’s naïve vampire of the original film.

Guest stars fly into the series with the opportunity to prove themselves, and nearly everyone lives up the hilarious cast. The most recognizable faces come in the forms of Beanie Feldstein, Nick Kroll, and Venessa Bayer. Others, including famed monster actor Doug Jones, get to play the more straight-edged, dangerous creatures. The seamless integration of these actors bodes well for future guest stars and potential recurring character arcs.

Ultimately, What We Do In the Shadows shines because of its fun tone and excellent cast. Everyone brings their best comedy chops and bites into the fun concept. This is the perfect show to throw on and fall into. It demands almost nothing from the viewer and provides gag after gag for your time. For horror fans or comedy fans, this is a must-watch show.

What do you think of Season 1 of What We Do In the Shadows? Let us hear your thoughts in the comments below! Look for weekly recaps starting next week!

Check out more of our TV recaps here.