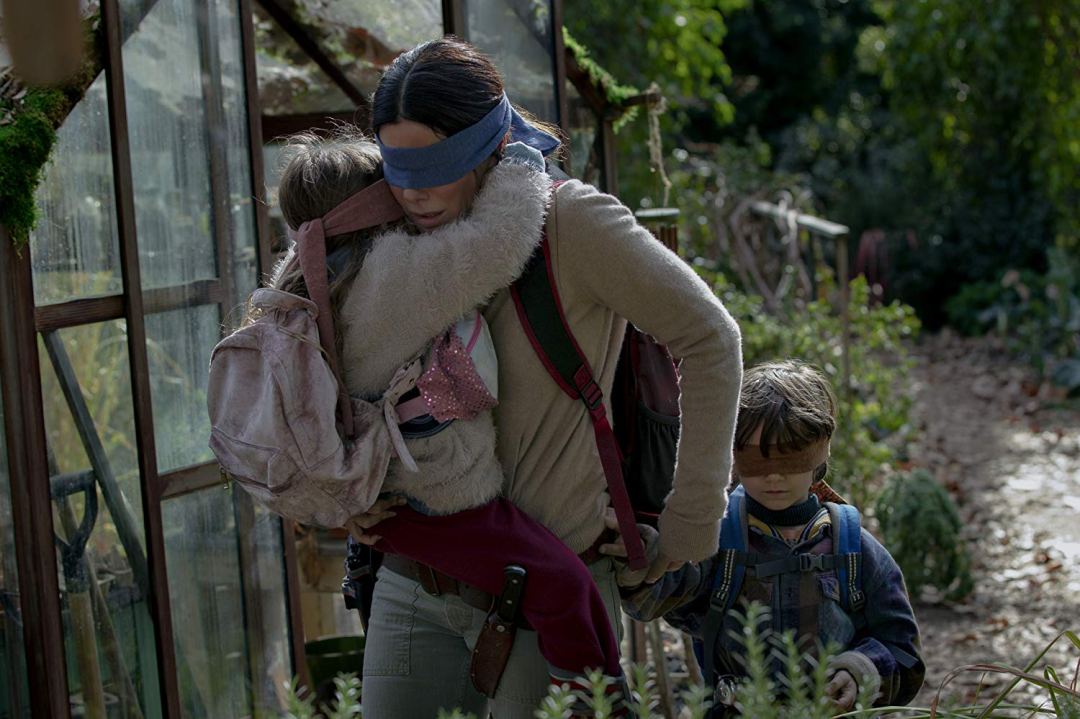 Earlier this year, A Quiet Place shook up movie theaters by depriving its audience of one of their senses. The feel of silence over a theater can be disturbing and unsettling. Facing the apocalypse had never been so unique in a theater. The overall look of the film, and the character’s inability to make noise made it a breakout hit. Yet another movie was already in production with a similar idea in mind. Netflix‘s latest film, Bird Box, follows a different vision of the apocalypse. In this world, those who inhabit society have lost the ability to see the world around them or risk being driven insane to the point of suicide. The sci-fi blockbuster clicks at every turn, and features excellent performances from Sandra Bullock and Trevante Rhodes to bring the heart pounding story to life. 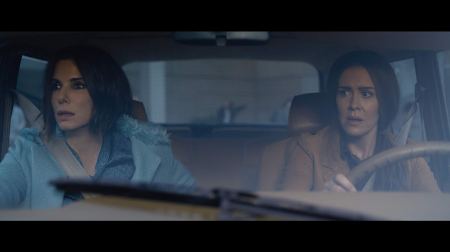 The film follows two paths. In one, a pregnant woman named Malorie has to take shelter when an unseen force begins to cause people to commit suicide. She finds herself in a company of strangers, forced to rely on each other for comfort and safety. Simultaneously, we see her in the future, heading down a river with two children named Boy and Girl as they try to find a new safe haven. As we bounce between the story threads, more of the mystery is unveiled, and the creatures continue to hunt humans. 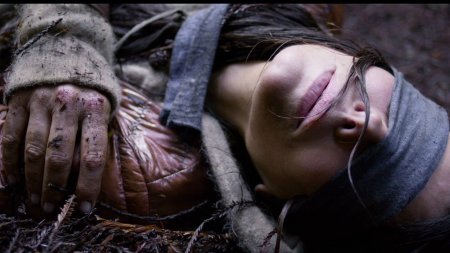 Bullock delivers an incredible performance of strength and emotion. She is a woman who never gives up, and her need for survival is only outweighed by the survival of her children. She’s tough as nails and doesn’t let anyone walk over her. Bullock draws from a deep emotional well on this one, and it’s one of her best performances as a result. Her take on the Sarah Connors survivalist continues to showcase her range in her post-Oscar career. A happy surprise coming out of the film is Trevante Rhodes, the actor that played the adult Chiron in Moonlight a few years ago. He continues to flex impressive charisma, and shows that Moonlight was not a one-off. In fact, he grabs the movie and goes toe-to-toe with established character actors and Bullock, easily becoming a highlight of the film. 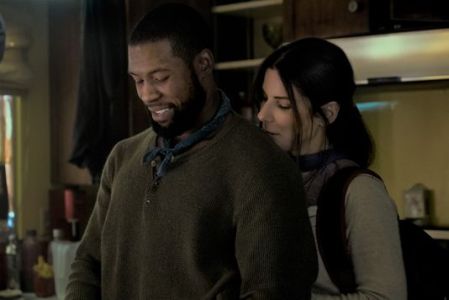 The cast gives a lot of character actors and newcomers good roles despite limited screen time. John Malkovich stands out, chewing into the scenery as the resentful jerk of the group. With his talent, he pulls the most out of his lines, and has strong chemistry with both Bullock and Rhodes. Danielle MacDonald, fresh off Dumplin’ continues to show she can be a fun piece in an ensemble. She doesn’t get a lot to do in this film, relegated to a traditional pregnant girl in her early 20s. However, her charm helps to bring stakes to her character’s arc. Jacki Weaver, Sarah Paulson, Tom Hollander, BD Wong, Lil Rel Howery, Rosa Salazar, and even Machine Gun Kelly all appear in bit roles throughout the film. It’s a surprisingly diverse and fun ensemble, and each brings something unique to the film. 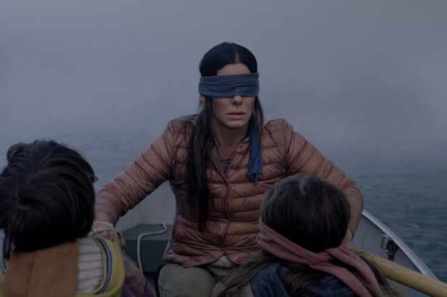 The tension throughout the Bird Box is executed well thanks to director Susanne Bier. With limited visual effects needed, she plays with visuals to create the monsters that haunt the characters. Perhaps the smartest tactic the film employs is not actually showing us the creatures in question. The closest we get are some drawings of the darkness, and they help convey the fear you would expect. There are still visual representations of the creatures, including shadows, leaves blowing in the air, and sensors in a car. It creates a very cool atmosphere, and helps sell the danger. Bier handles the actors and actresses well and does a lot to bring out interpersonal moments that pay off time and time again.

The screenplay from Eric Heisserer (and based on the 2014 book from Josh Malerman) is rather basic, comparing favorably to a modern day I Am Legend. Still, it is efficient in its storytelling. The structure serves as a semi-spoiler for how the events at the house unfold, but it also keeps the tension building over the course of the film. It also helps develop the relationships with the children, rather than making them feel like an afterthought in the story.

Bullock’s character and her relationship to motherhood are a through line that helps raise the stakes of many moments. The movie doesn’t say much new on the topic, but it doesn’t have to for the emotion to hit. The diversity among the characters is a positive, and the film’s willingness to acknowledge that Rhodes and Bullock have strong enough chemistry to sell an interracial relationship is a huge plus in its column. On the flip side, the treatments of those with mental illness are a bit problematic. It’s hard to shake the negativity from that side of the story, and it does undo some of the goodwill Bird Box gains.

Bird Box is not a revolutionary action or survivalist film. However, it does an excellent job at effectively telling a creepy and tension filled story. Bullock gets another great performance from the film, and it is undeniably her vehicle. Rhodes will get a boost, and Susanne Bier should be given a good boost from the way she is able to elevate the tension throughout. More than anything, it’s a fun way to spend a couple hours and see the way that Bullock’s careers has evolved in such a big way. She’s undeniably the most interesting aspect of the movie, and she’s why you should flip it on.

What did you think of Bird Box? Let us know your thoughts in the comments below!

Check out our other film reviews here!