Review: ‘The Night is Short, Walk on Girl’ Blends Absurdity With a Familiar Love Story.

Absurdism is a tough cookie to crack. You go too deep into the absurd and you risk losing your audience. Dial it down and it might not have the impact you intend. it’s a tightrope walk very few dare attempt, let alone succeed, but those that do are lauded with the highest praise from audiences and critics alike. Animator and Director Masaaki Yuasa is throwing down the gauntlet, trying to take the title of Absurdist King, and he has quite the unique vision. Watch a clip of Ping Pong the Animation (or if you are feeling extra spicy Devilman Crybaby) to get a taste of his animation. Weird isn’t it? The way Yuasa plays with colors, with action, with expressions, with even the most mundane things is done with such care and exaggeration that you can’t help but to feel the weight of his work.

Yuasa is probably best known in the west for his work on the Adventure Time episode Food Chain which, in a show that is already chalk-full of absurd and surreal moments, cranks it up to 11 and melts these kids’ minds with a truly stunning work of art. When I found out Yuasa was making a feature length movie I was already sold and hoped and prayed it would get a release somewhere close to me. A few months later and here we are. I saw The Night is Short, Walk on Girl last night and oh boy do I have things to say about this film.

Let’s start with the visuals. Yuasa’s animation style is incredibly unique and may be off-putting to people who watch only Disney and Pixar. Yuasa doesn’t shy away from experimenting with his style. Everything in this film is the most over-exaggerated version of itself, from the illustrious beverages to the physicality of drinking the previously mentioned beverages. Everything has a sort of grand spectacle feel to it that puts the everyday into the surreal. The use of color is exceptional and multi-faceted. With the vibrant hues bringing out the luster of the liquor, the bright and energetic lights bring to life the night-life of the big city, and the cold and drab grays and blacks that fill out the dark and loneliest moments of the film. Where Yuasa shines is when he starts playing with contrast and drastic changes in animation style. In the opening scene, dark silhouettes plastered to a lively background show the chaos of the cities night life and linger just long enough to make an impact. Then BAM, a dramatic change to another perspective; a girl floating in a sea of bright blue liquor wanting nothing more than to drown out her sobriety for a chance to be free of her inhibitions, to let the night take her wherever it may go. It sets a strong message for the rest of the film; buckle up buckaroo…things are gonna get weird. The rest of the film is just as wacky and absurd as the first 5 minutes, deciding to lean into the absurd . What starts out as a night on the town ends with impromptu musical parodies (yes plural) of The Count of Monte Cristo written by a man who hasn’t changed his underwear in a year, a triple-decker bus with a pants-stealing mobster, the god of used books wreaking havoc at a private book auction, a koi-infested tornado that is the manifestation of one man’s loneliness, and probably the best interpretation of a man’s inner monologue and “Id” ever put to paper. After reading the above, if you are left with a sense of…confusion I don’t blame you. Just like any good absurdist work, saying it out loud just doesn’t do it any justice. It is truly an experience you have to see to believe. 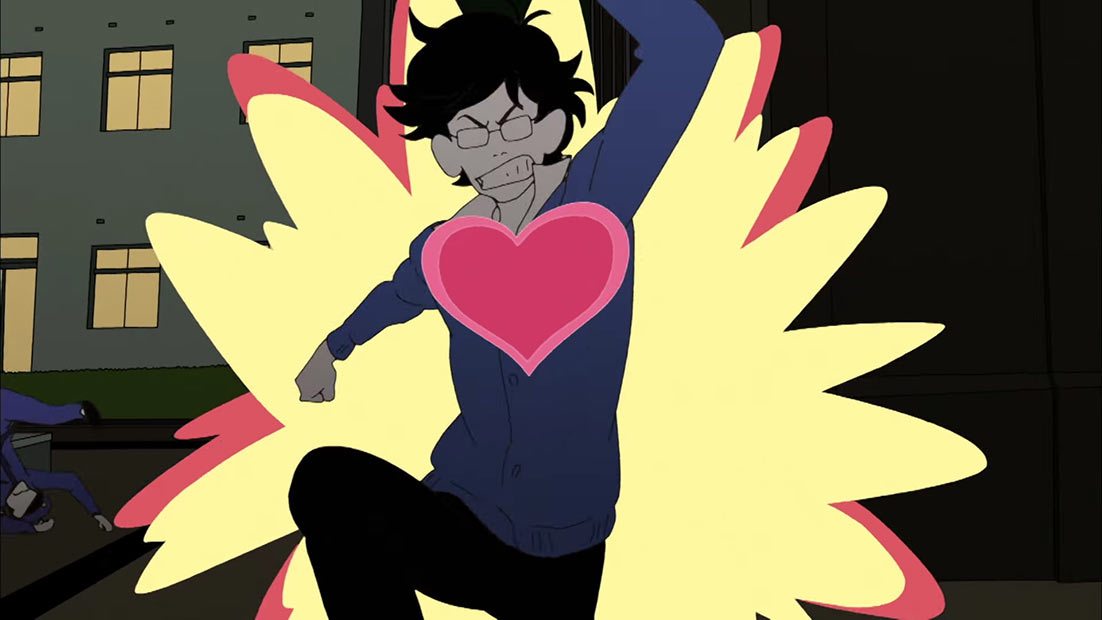 One of the more interesting aspects of the film is the way it treats alcohol. So much of the media representation of alcohol is the negative aspects of addiction and the like. Seeing alcohol cherished and celebrated feels… weird. Most of us have fond memories of having a few drinks and just having a night on the town and Yuasa does a great job of giving us a taste of nostalgia, of the freedom that inebriation can bring on a cold night surrounded by strangers and friends alike. Seeing alcohol from the eyes of a girl going out for drinks for the first time allows for a certain mysticism to be draped in, a unique take on what can be a touchy subject for certain audiences.

Overall I am glad I got to see this film in theaters. It’s rare that I get a chance to see limited release based on where I live and this was truly special. While I would recommend everyone to see this, you’re gonna have to wait until its released on streaming and/or DVDs. Trust me. It is worth the wait.

The Night is Short, Walk on Girl directed by Masaaki Yuasa produced by Toho

One thought on “Review: ‘The Night is Short, Walk on Girl’ Blends Absurdity With a Familiar Love Story.”